Since its release in 2012, Counter-Strike: Global Offensive (CSGO) has become one of the world’s most exciting esports games ever. The game has attracted and continues to attract hundreds of thousands of players worldwide. There are also multiple CSGO competitions where the best players and teams compete against each other for the grandest prizes.

One key feature available for CSGO players is CSGO skins. In video games, skins are some sort of alternative outfits for weapons or characters. In CSGO, skins are unique visual designs for weapons. These skins do not affect the game. Instead, they are purely cosmetic items that just affect how a weapon appears and not what it does.

CS:GO has a wide variety of weapons. Similarly, there is a wider variety of skins for these weapons. Skins became a fixture in CSGO following Valve’s introduction of the “Arms Deal” update in August 2013. These skins are also referred to as “finishes” and range from the realistic to the absurd. Some of these items have features that can prove to be a tactical advantage to players. For example, the Aztec skin has a camouflaging feature that blends your gun into a jungle environment. Other skins could also be outlandish, like the Akihabara Accept.

CSGO finishes are also classified as Normal, StatTrak, or Souvenir. If a weapon has a StatTrak finish, it will help players keep track of the number of kills they have made during gameplay. Meanwhile, souvenir skins are those released during CSGO tournaments. Some of these souvenir skins are rare, and this makes them valuable in the market.

While there are hundreds of CSGO skins, this article focuses on the best M4A4 CSGO skins. Here, you will know the features of these finishes and the best of them. You will also discover the cheapest M4A4 skins in the market and where to buy them.

M4A4 is one of CSGO’s most popular assault rifles. Many of the game’s players love using the weapon, which originates from the United States of America. The M4A4 has a magazine capacity of -30/90 and is one of the most purchased weapons in the game.

If you play CSGO a lot, there is a high chance that you have used the M4A4. It is one of the best weapons in the game and has power and accuracy that is only surpassed by the very powerful AK-47. If you are the kind of player that enjoys fast and clean kills from far and close ranges, the M4A4 is a perfect weapon for you.

Here are five of the best finishes for M4A4:

The M4A4 Howl is a unique finish in CSGO. It was added to the game in 2014 as part of the Huntsman Case. However, the Huntsman Case does not drop the Howl anymore, making it the rarest skin in Counter-Strike. Hence, it is very difficult to find the M4A4 Howl today, and if you manage to find one, the price can start from as high as $1600. The M4A4 Howl is special and remains the only Contraband skin in existence. Due to its rarity, if you manage to find one, you will become one of CSGO’s most unique players. 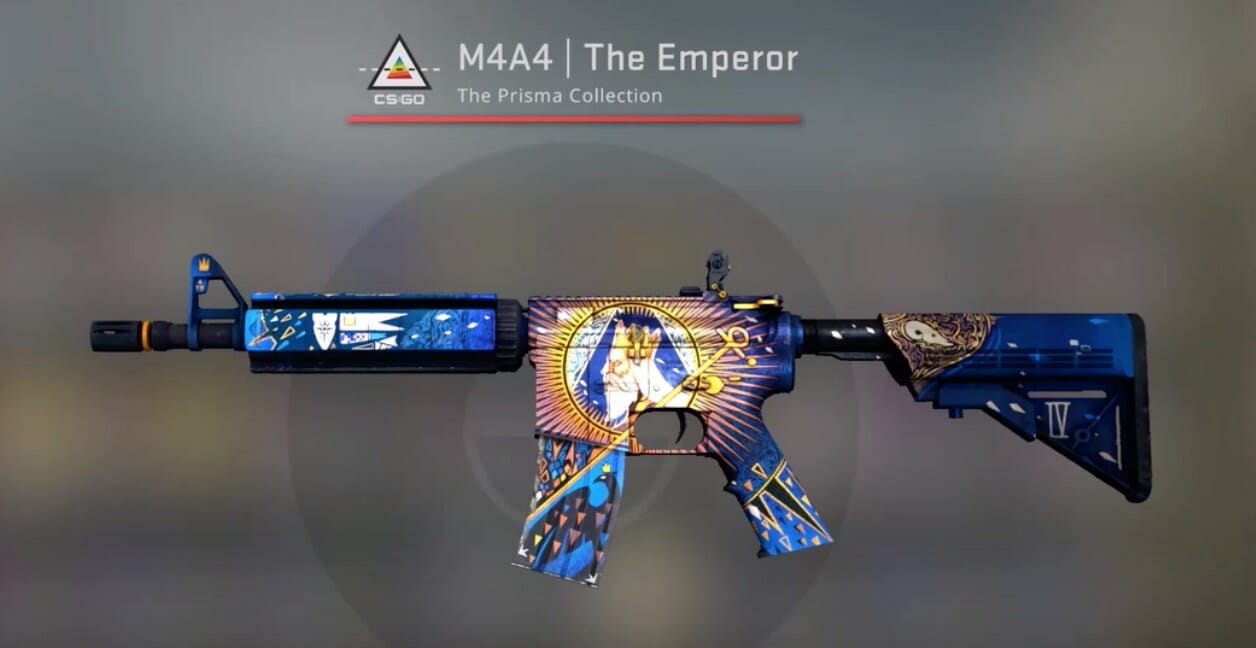 The Emperor is found inside the Prisma Case. You can also find it in the Steam Community Market. Its price starts from $13 if its condition is Battle-Scarred. It made its debut in CSGO in 2019 and has a Gunsmith finish style as one of its features. The Emperor got its name because it was inspired by the “Emperor” tarot card. It features dark blue and gold colors and has no unpainted parts. With this finish, you can stand out during battle. Although it is not as expensive as the Howl, it can still be as high as $700. 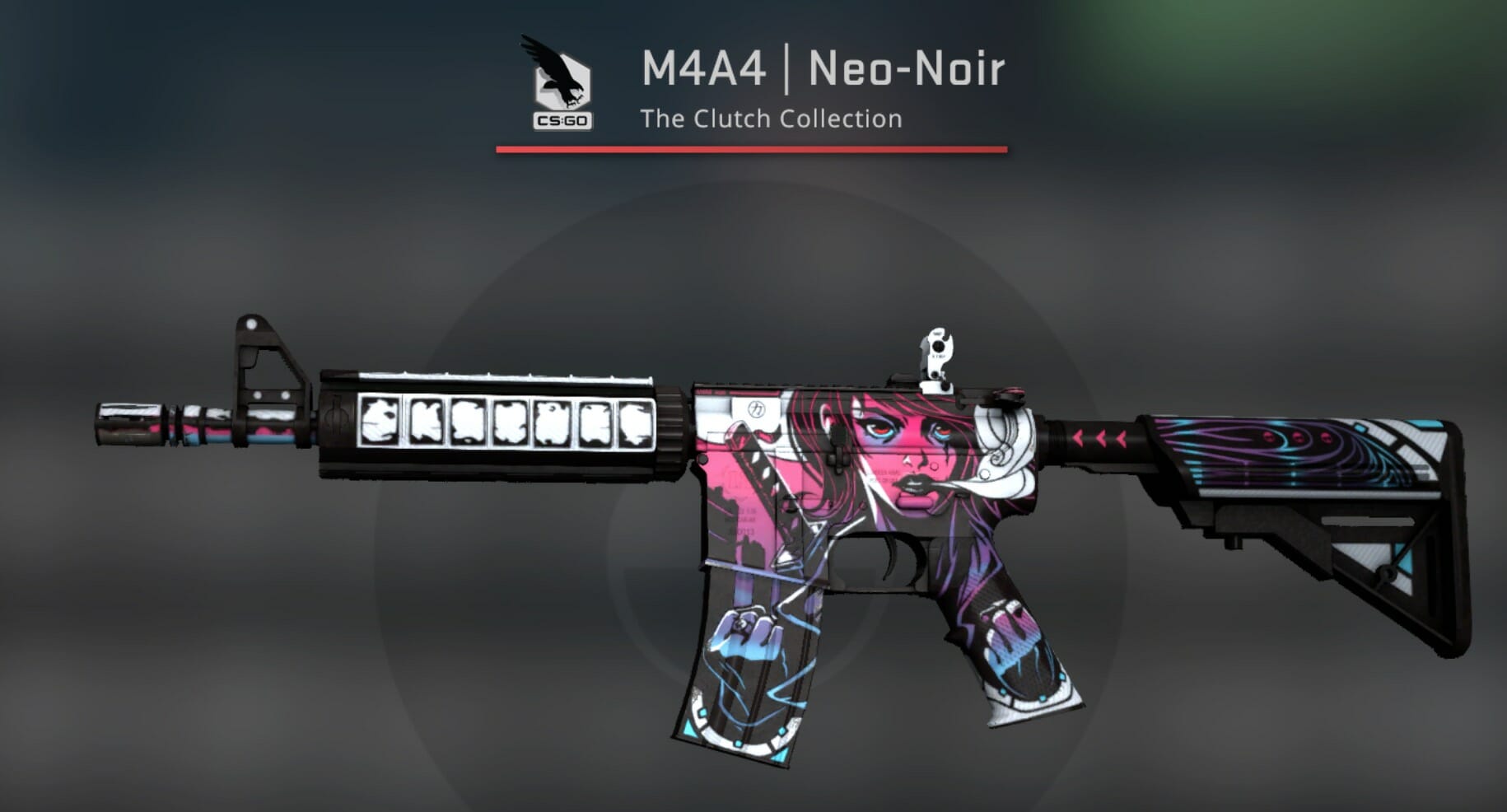 This is a unique and attractive finish that was added to the game in 2018. The covert rifle skin can be found inside the Clutch Case or on the Steam marketplace at a starting price of $8. Neo-Noir features the image of a blue-magenta woman over a light-gray color background. The finish has enough to leave your opponents fearful when they see you. 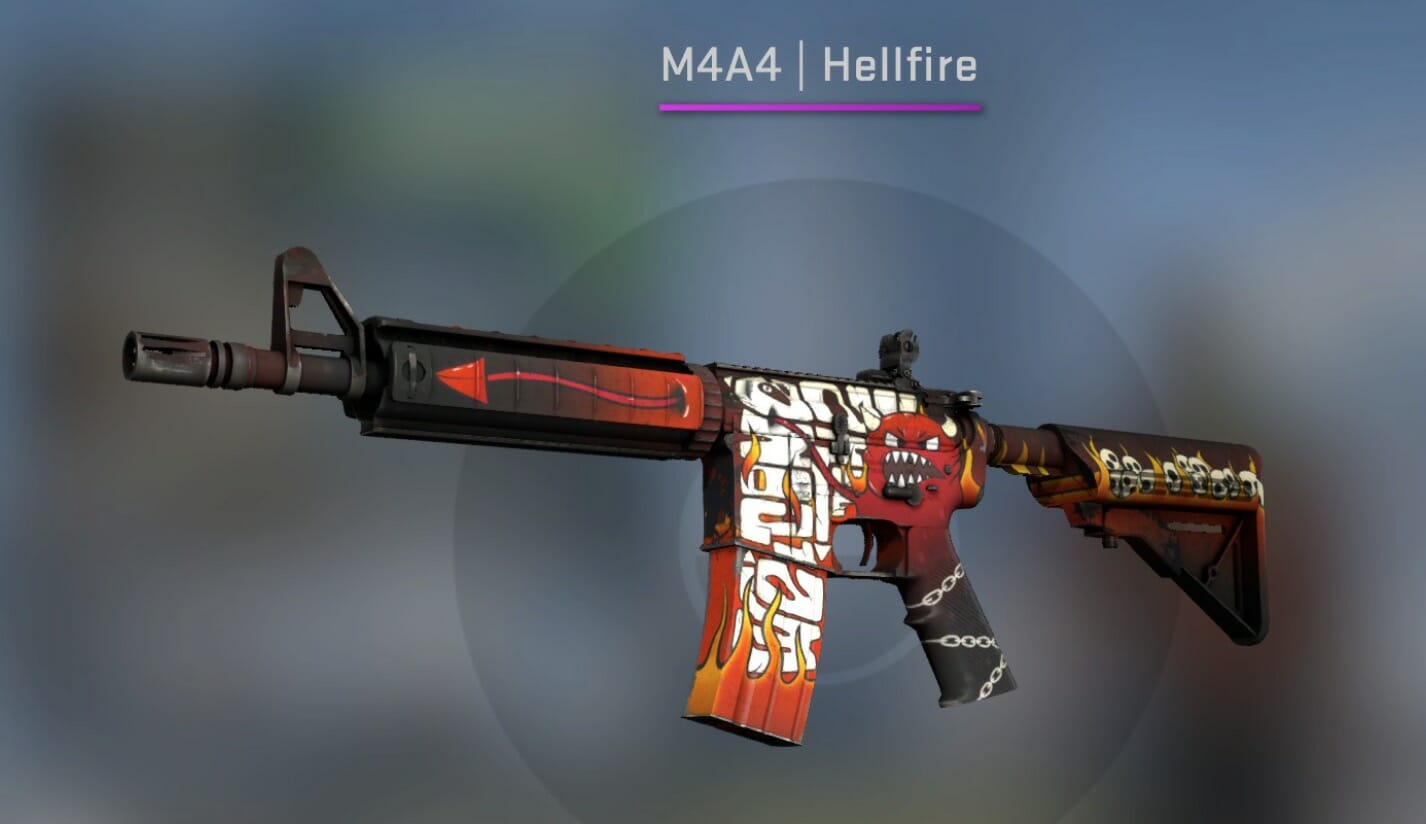 It is a classified Rifle skin that made its CSGO debut in 2017. It is found in the Operation Hydra Case and on the Steam market, where it sells at a low price of $17. Hellfire has a dangerous-looking appearance. It features a devil-like character whose tail points through the weapon. It is rather humorous than scary but is one finish that is worth owning. Another incredible feature Hellfire has is the graffiti-style writings present on the magazine and chains that wrap around the rifle’s handle. 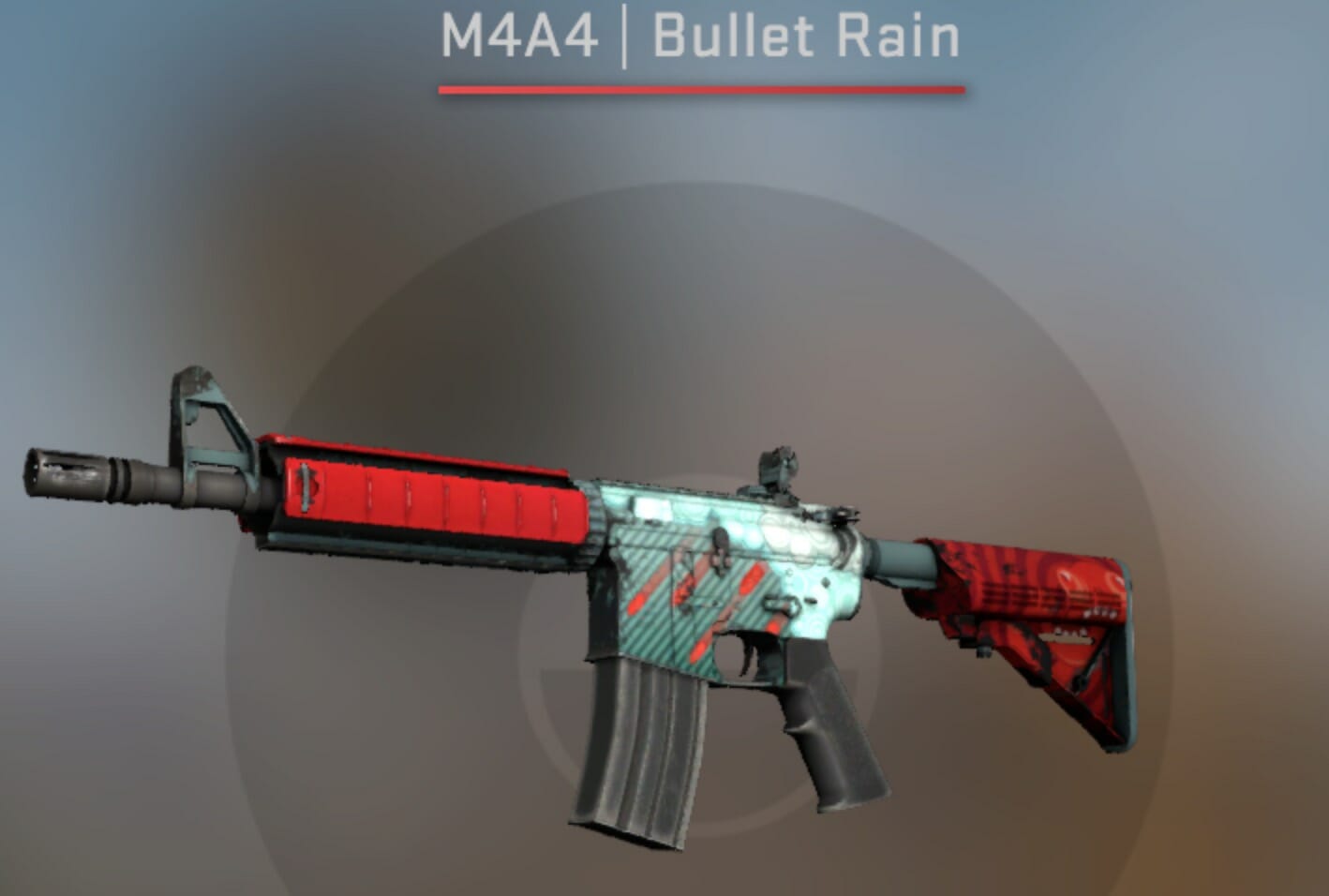 M4A4’s bullet rain skin is a Covert Rifle that made its CSGO debut in 2014 as a part of the eSports 2014 Summer Case. It is available on Steam at a starting price of $46. This finish is exclusively for the M4A4 weapon. It features various shades of teal, red, white, and gray. The rifle’s handguard and buttstock are painted red, while the skin’s center features falling red bullets from white clouds over a striped teal base paint. A creature with large eyes is also featured on the buttstock.

Although you need M4A4 skins to boost your weapon’s appearance, you don’t necessarily have to spend so much to have them. Here are five of the cheapest M4a4 finishes you should consider:

It is one of CSGO’s few gray skins and is all about discreet dignity. Its starting price is $1.37.

It is a finish that looks cool even in terrible conditions. Its price is $1.55.

This is a great-looking CSGO M4A4 finish that features silvery-gray flames. It costs $1.86, while one with StatTrak costs $8.8.

This is an excellent red skin for your M4A4 that costs $2.55. To get the best out of the Converter, don’t get a grade lower than Factory New, else, it would be a waste of money.

CSGO creators have always found ways to boost their players’ experience on the game and have created several features to ensure this is the case. One of the features included in the game to ensure players remain fascinated is CSGO skins, otherwise known as finishes. In this article, several skins were reviewed for the M4A4, which is one of the game’s deadliest weapons. The skins reviewed are some of the best for M4A4. You can also check out the cheaper skins if you don’t have enough money to go for more expensive options.