Getting to Know CSGO Spray Patterns and Recoil

Learning CSGO spray patterns to shoot flawlessly in the game using different weapons might sound nerdy. Some even believe it is unnecessary and go on with burst firing as long as they can kill. But neither if you are just a newbie or training to be a pro in counter strike, knowing the spray patterns and CSGO recoil patterns of specific guns will surely give you a great advantage.

Having the perfect aim and headshot is not enough if you are facing a lot of enemies. So, keep reading because this article will give you tips on how to practice spray control and kill all those enemies down to pieces.

Have you ever wondered why the longer you fire your gun, the more your aim at a specific target moves away from that direction? This is because every weapon or gun has recoil and CSGO spray control patterns. CSGO weapon spray patterns are the direction of the bullets in continuous shooting using a firearm. Counter-Strike made this behavior to make the game more realistic, like handling real guns which have a recoil or a backward movement to a shooter when the bullet is shot.

Scientifically speaking, when a gun exerts a force on a shot bullet, it is launching it forward. And the law of physics says the bullet will exert an equal force in the opposite direction of the gun, which makes CSGO spray patterns and CSGO recoil patterns the exact opposites of one another.

Firing weapons only have two probabilities which would affect your aim, recoil and inaccuracy. Recoil and CSGO spray control patterns usually play a huge factor in the game’s victory or defeat, but it is not the only reason to blame all your missed shots. The system also has an inaccuracy, increases or decreases depending on your game actions, whether you are walking or running, standing or crouching, and more. Since this inaccuracy is so random, there is also no way to compensate for CSGO spray control, but can only be reduced by moving less.

So, the good thing about CSGO recoil patterns is their consistent and predictable pattern, where the only thing you need to do is familiarize or memorize all CSGO weapon spray patterns. These patterns vary from each gun, such as having wider and bigger spread while others only have smaller ones. Below are some of the examples with the corresponding tips on how to control it successfully. 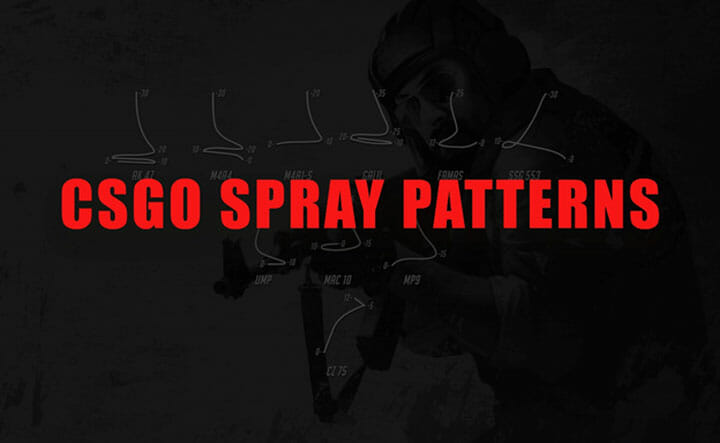 The AK47 is known to be one of the best weapons in Counter-Strike and can be bought only by Terrorists. This gun has the power to perform a “one-tap” kill which means it can kill anyone with a headshot even if they are wearing a helmet. Some players find it difficult in trying to use because of the AK 47 spray pattern. These CSGO weapon spray patterns are one of the most complicated ones in terms of recoil. Its CSGO recoil patterns are hard to master, and players need a lot of training hard to control them completely.

Their bullets fly close to the target up to the 5th bullet. Moreover, the gun starts to move between left and right, where after 10-11 bullets, it will almost be impossible for a CSGO spray control.

The CSGO spray patterns of the AK47 climbs towards the top while moving towards the left, where it stops to climb after 10-11 shots. It then moves to the right and then in the left direction and then towards the right again.

The M4A1 spray pattern has marginally better accuracy and somewhat lower CSGO recoil patterns than its nearby cousin M4A4 aside from when jumping (which you should not do while shooting at any rate). It has 5 fewer rounds than the M4A4 in every magazine and just has 3 extra magazines upon buying. Its penetration, damage, armor infiltration, and any remaining details are indistinguishable from the M4A4. But in contrast to the M4A4, the M4A1 comes with a suppressor or silencer attached upon purchase.

This can be eliminated but is not recommended as this makes the CSGO weapon spray patterns less precise than the M4A4 (subsequently making the weapon futile). The silencer likewise hides bullet tracers and muzzle flash, making the M4A1 the ideal ambush gun. Similarly, as with different rifles, the M4A1 spray pattern is best while standing still. Its low recoil makes figuring out how to counter its CSGO spray patterns simpler than for the M4A4 and AK47 spray patterns.

Similar to its kin, the M4A4, this CSGO weapon spray patterns first climbs downward and then moves from one side to another at the apex. A critical distinction to note is the vertical recoil is lesser. The first 10 bullets fly straight up, then after the 10th, they just go left and right.

Tips on How to Practice Spray Control and Recoil Compensation

After learning about CSGO spray patterns and recoils, what you need to do next is learning how to practice spray control. Learning how much you need to move your mouse down for the first 10-15 bullets to aim in the same spot would be enough for lower ranks and will not necessarily require learning exact spray paints.

But since everyone is aiming to compete on a higher level, then learning the exact spray pattern and controlling it well is something everyone should learn. To spray effectively is more than just standing still and spraying against a wall.

Practicing with your favorite guns regularly is the only way to progress in this matter. The most effective way to do this is to try shooting your bullets at a wall and observe it up close later to see how your performance did. After you have some background on how to control the recoil, you can then advance your skills to joining a live match and see how you can perform the moves on other real players.

Although it can be overwhelming to think you need to master every gun to be good at CSGO, practice and knowledge with a different array of guns are always helpful skills to have, though they are not necessary to win. Start focusing to practice with your favorite gun to make it much easier while being just as effective.

Before you start practicing in-game, you should begin by tracing out the recoil compensation patterns, which are available in online guides with your mouse. This will give you a good idea of how to counter the recoil of the gun and build up the foundation of your ability to tackle recoil.

Some people can find it hard to keep the gun under CSGO spray control. It is normal to feel the task is incomprehensible when beginning. Driving forward till the end will give you an upper hand over most players who didn’t try to put forth the attempt. It will be rewarding when you’ll have the option to kill quicker than any other person in the match.

The most effortless approach to manage recoil is to just wait for a couple of seconds between bursts of shots to make the CSGO weapon spray patterns time reset and the crosshair maneuver down to its pre-recoil position. This is a beginner strategy; however, also adequately restricts the discharge pace of a weapon. But a better procedure comprises only two things to focus on when attempting to counter a CSGO spray pattern:

How to Practice Spray Control in Actual Game

There may be a lot of available practice for CSGO spray patterns online, but it is still better to set up a local server and start training and practicing for yourself. Below are some useful console commands after starting a local server without bots to get started.

After you start up CSGO and start an empty server, fire whichever gun you wish to practice with at a blank wall. When firing, take note of how much the gun moves and in which direction it goes. Then, go closer to the wall you had fired and observe the bullet marks you made. This should show you the spread of the gun and how much-sustained firing can impact aim, especially at long ranges.

Alternatively, if practicing spray controls with commands does not suit your game buds, there are still many sites online you can use to practice the bullet spread patterns of all the weapons the CSGO features. All of these sites show not only the departure of each bullet but also the pattern to counter the recoil in the form of animation so you can see its exact timing as well.

Is an excellent site that analyzes your playstyle by using Artificial Intelligence or AI. They evaluate which weapon needs on how to practice spray control and offer suggestions on how you can improve faster.

However, all these sites are only good for practice. You need to increase the realism by playing against moving bots followed by game modes against real players, like DM or Arena. Once you think you’re effective at spraying with the weapon you’re currently practicing, jump into a match where you carefully watch your spray to evaluate if you’re ready for officials/pugs.

In conclusion, there are many different techniques that one must master to get good at CSGO. One of it is how to practice spray control of bullets being the easiest place to begin and the best way to improve the damage result of rapid-fire weapons. Mastering this pivotal aspect of CSGO can give you a competitive advantage over players who don’t know how to counter recoil and fire more inaccurately as a result.