Counter-Strike: Global Offense is the most popular multiplayer first-person shooter gameplay created in the 2010s. It is a well-played online game among casual and professional gamers on both consoles and computers. And since the game is ever-evolving, it has created its ranking system that would indicate different ranks depending on how well a player knows the game.

Not everyone knows how the CSGO ranking system works, and some do not know all the CSGO ranks. But the truth holds the answer is quite simple. However, this does not apply to other competitive games. For instance, Dota 2 shows the actual Matchmaking Rating (MMR), which provides the skill level of each gamer. However, this differs in the case of CSGO as it does not show an MMR number associated with their account but rather shows only the user’s rank or medal.

Unlike other esports, the CSGO matchmaking system does not depend on a player’s losses or winnings. It also takes into consideration variables such as MVPs, KDA, bomb difussal, damage per round, bomb plants, and so on. Despite all these factors, it is still the victory itself as it gives a higher weight in the overall calculation of CSGO ranking. But any gamer should not take for granted the effort during the war as it is also taken into account.

With CSGO competitive ranks, a player should know a thing or two on how to rank up in CSGO. In this article, it will guide all counter strike players to improve their respective ranks CSGO. 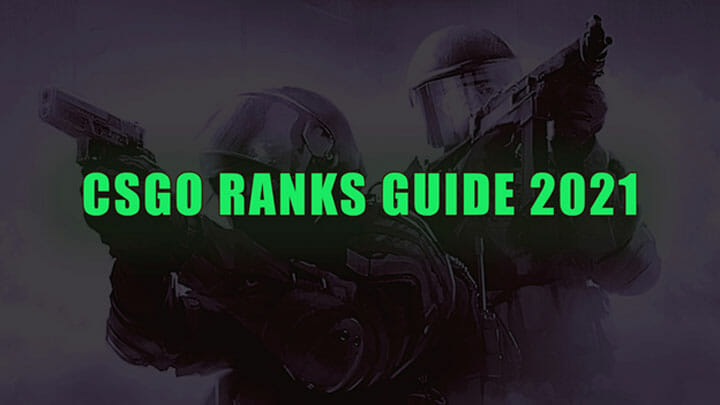 The CSGO ranking system is the method of knowing one’s gameplay capacity. To earn ranks in CSGO first requires anyone to reach level two by playing any basic gameplay: Demolition, Deathmatch, Casual, and Arms Race. After getting to level two, a player can enter into ranked matches to improve their CSGO rank distribution. He or she will have to win ten matches to get a rank, and a he or she who is rankless will have to play games with a mix of skill levels – which can be intimidating at first for new players.

In the world of esports, there is no perfect CSGO rank distribution system out there. However, there is an independent analysis website which provides a breakdown of the rank distribution. CSGOStats is a website, which shows the percentage of active players in each rank over a day, week, or month. CSGOStats collects data on random matches, which analyzes it and gives information on how the ranks spread out.

Here are all CSGO ranks list, from the highest to lowest:

In any gameplay, it categorized players into their respective tiers. Since players in CSGO competitive ranks generally exhibit almost the same behaviors during gameplay with some exceptions.

Silver I to Silver Elite Master

Someone who is under this CSGO rank is known to be a newbie in the game. It is technically a tier that is at the bottom of the food chain. Most in this tier does not have a good aim and does not even know a single nade lineup. Lastly, he or she in this rank is not familiar with the map structure of the game. This CSGO rank range is where players will find smurfs.

Getting out of the Silver ranks is very easy, but it will depend on a player adapting and learning capability. There are a lot of servers anyone can go to improve and rank up. Once a player advances to the Gold Nova stage of the CSGO ranking system, he or she will have the opportunity to add more aspects to their respective CSGO rank distribution.

Players in this tier should learn to improve their gameplay as these are another CSGO competitive ranks where one is required to learn how to throw important molotov and smokes on each map. It is also a stage where anyone needs to learn how to exploit the weakness of the enemy.

This CSGO ranking is where things get a little bit competitive as they are definitely in an advanced tier. A player will encounter insanely skilled individuals but lacks game position and movement.

At this level up to the Global Elite class, it is where the elite of counter strike resides. And each player has already gained more experience in playing the game. A player at this level has learned most of the economic buy trends, spray, site execution with utility, different nade line ups, crosshair replacement, and retake coordination. Anyone who wants to climb the CSGO ranking system at this level should be more consistent in their playing time and learn more tactics.

As the ranking name, there is nothing to say more about these CSGO rankings. Among all the CSGO ranks, this is the tier where players would want to reach. At this level, it comprises the population of the best players who compete worldwide. And this is where you will meet players who come to the game to find strategic ways to kill other players.

With the CSGO ranking system coming along the CSGO level, most players will stumble upon. There are a variety of CSGO levels. However, unlike ranks in CSGO, which would represent anyone’s skill, levels would only reflect the amount of time they have invested in the game.

In CSGO, there are 40 levels right now, and a player shall earn XP points by competing in different game modes. However, he or she can gain more XP points by playing competitive modes in CSGO. And once he or she achieves 40 levels, there will be a CSGO service medal awaiting them. 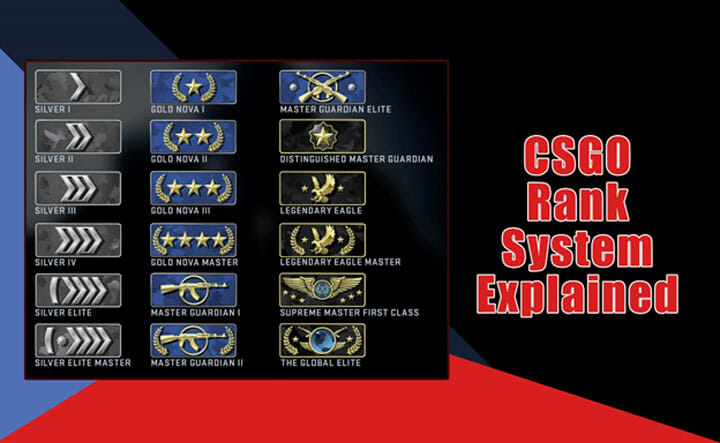 Tips on How to Rank up in CSGO

CSGO is a game that is affected by individual gameplay. And climbing the CSGO ranks list, anyone must know some tricks to rise to the next rank. Here are some tips a player should know to get better and rank faster.

Sometimes the easiest way is always the hardest. He or she who works hard in learning new strategies and investing time in playing CSGO will develop a better gaming sense. One should have to schedule some time intended only for playing.

Another way to enjoy playing is to create a party with friends that will help a player develop coordination skills with his or her teammates. It is like playing Russian roulette, but instead of bullet firing from a gun, the members in a team would decide as one as to whom will remain.

One of the factors to climb in the CSGO competitive ranks is to specialize. A player should not do a little of everything as this will only slow a player’s progress. Instead of learning everything, a player must focus on the same role every game to master. If a player is comfortable playing one position, then it must be communicated during the game. A player should practice in competitive matches and train mindlessly. Lastly, in mastering a specific role, a player should find a way to get better in a systematic manner.

Learn from the Professional CSGO Scene

A player who wants to get into the CSGO ranks list must follow and watch upcoming events. In watching these events, a player will learn more about nade lineups and copy a game-style of other professional CSGO players and teams. And watching the best CSGO players around the world play is an excellent way of learning how to improve a player’s game.

A player must not try every map in CSGO. Before going to one map after the other, a player must master it before moving to another. In specializing one map, a player will have an advantage once chosen as a war ground. And specializing in each map will be beneficial in adjusting one’s gameplay.

Don’t Play After A Loss Game

When a player loses a game, they mindlessly get to the next game after. With frustration and hoping to win back a loss is a bad strategy. This kind of gameplay will likely make a player lose more games, as they will play out of anger from the previous game and will annoy teammates and lead to less focus.

Instead of going straight to another game after a losing game, a player should take a short break from competitive matches to contemplate what went wrong in the previous match. In doing this will also help a player avoid losing games and will affect their ranks in the CSGO ranking system.

There are skills to master in Counter-Strike, but there are some crucial skills a player must always practice. And two of those skills are aiming and smoke grenades. The aim is perhaps the most needed skill to master in CSGO as this mostly wants a player would do, aiming at the enemy and killing them. With smoke grenades which would allow aiming at an enemy, is a deadly combination skill in CSGO.