Welcome To The Best AWP Skins

Whether you are a long-standing CS:GO player or you’re new to the game, it is likely you are familiar with or have at least heard about the AWP. It is one of the most popular guns not just in CS:GO but in gaming history, particularly FPS (First-person-shooters). This guide will feature a full list of AWP skins.

Let’s get started with the skins that are the most desired and expensive, as they are without a doubt the most popular and impressive of the lot. 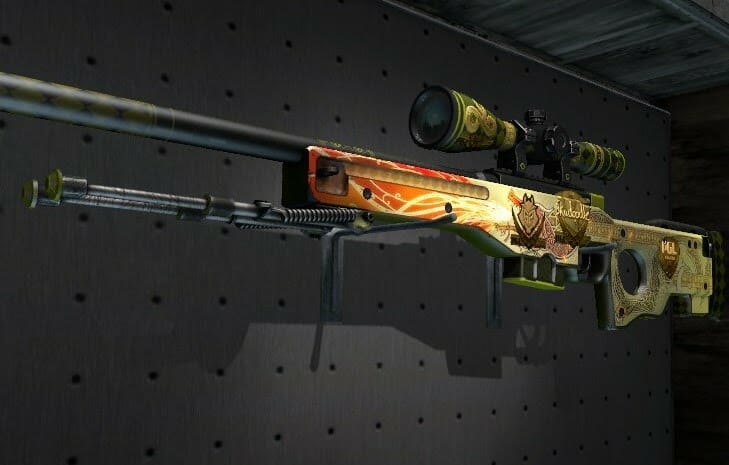 Starting at £31,659. 75 there is the Dragon Lore, the most expensive AWP skin of all time. It is also the rarest AWP skin, and at the time of creating this guide, there were none available on the Counter-Strike: Global Offensive Steam marketplace at all. Coming from the Cobblestone Collection, it has a custom painted knotwork dragon, and “200 keys could never unlock its secrets”. It is guaranteed to impress anyone you face in the games multiplayer modes. 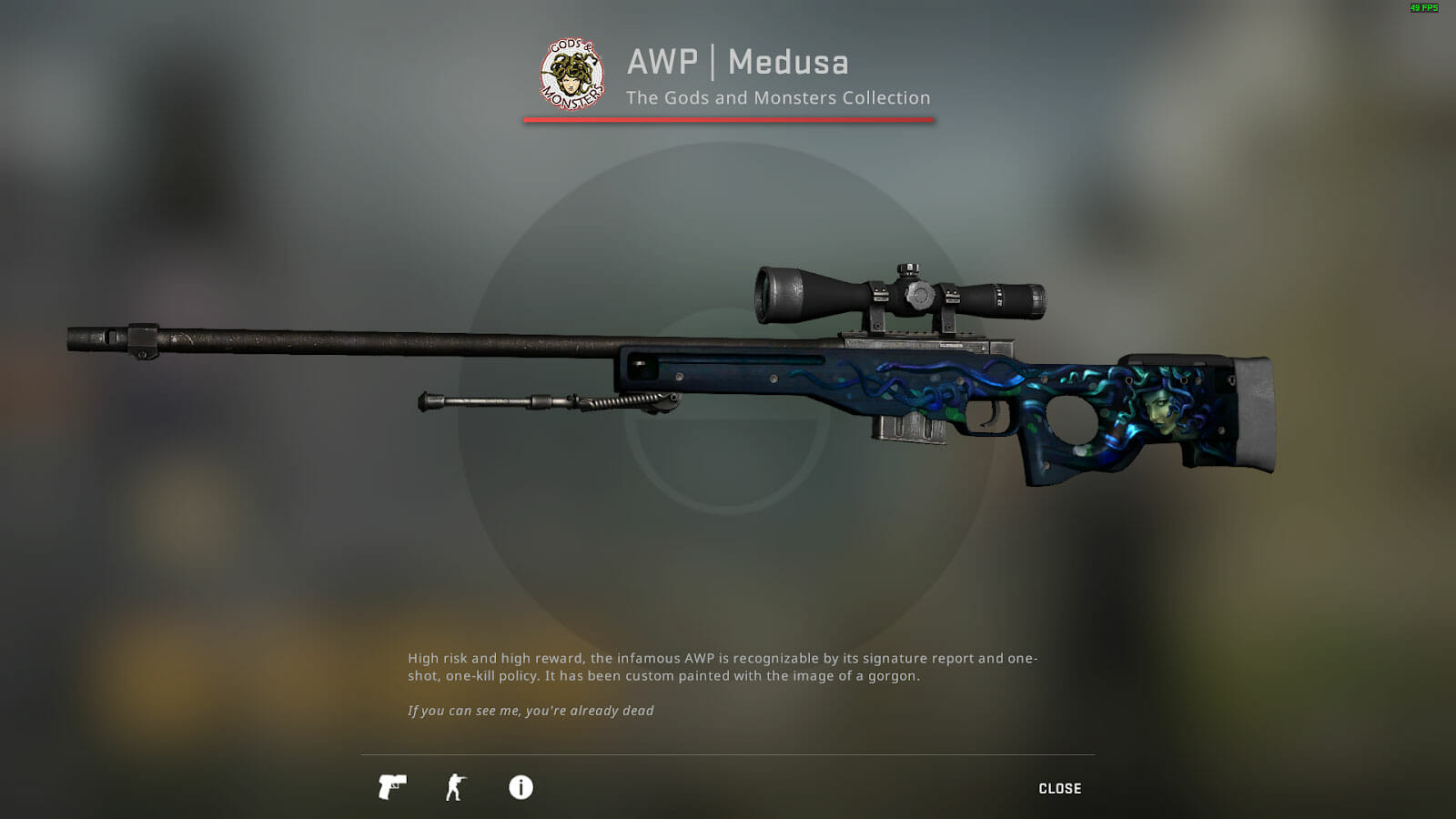 At the time of creating this guide, there was just one available on the market, so despite the drastic price difference between the Medusa and the Dragon Lore, the Medusa itself is still an incredibly rare AWP skin. It is custom painted with the image of a gorgon and is part of the Gods and Monsters collection. 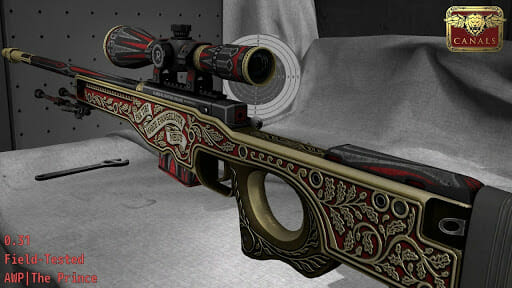 Next up is The Prince, which was also not on the market at all during the time of this review. It comes from the Canals Collection and has been custom painted with a red base and gold filigree, given the indication that you will command the lobby. It is possibly the most eye-catching skin of all, so it’s no wonder that there is a limited supply. 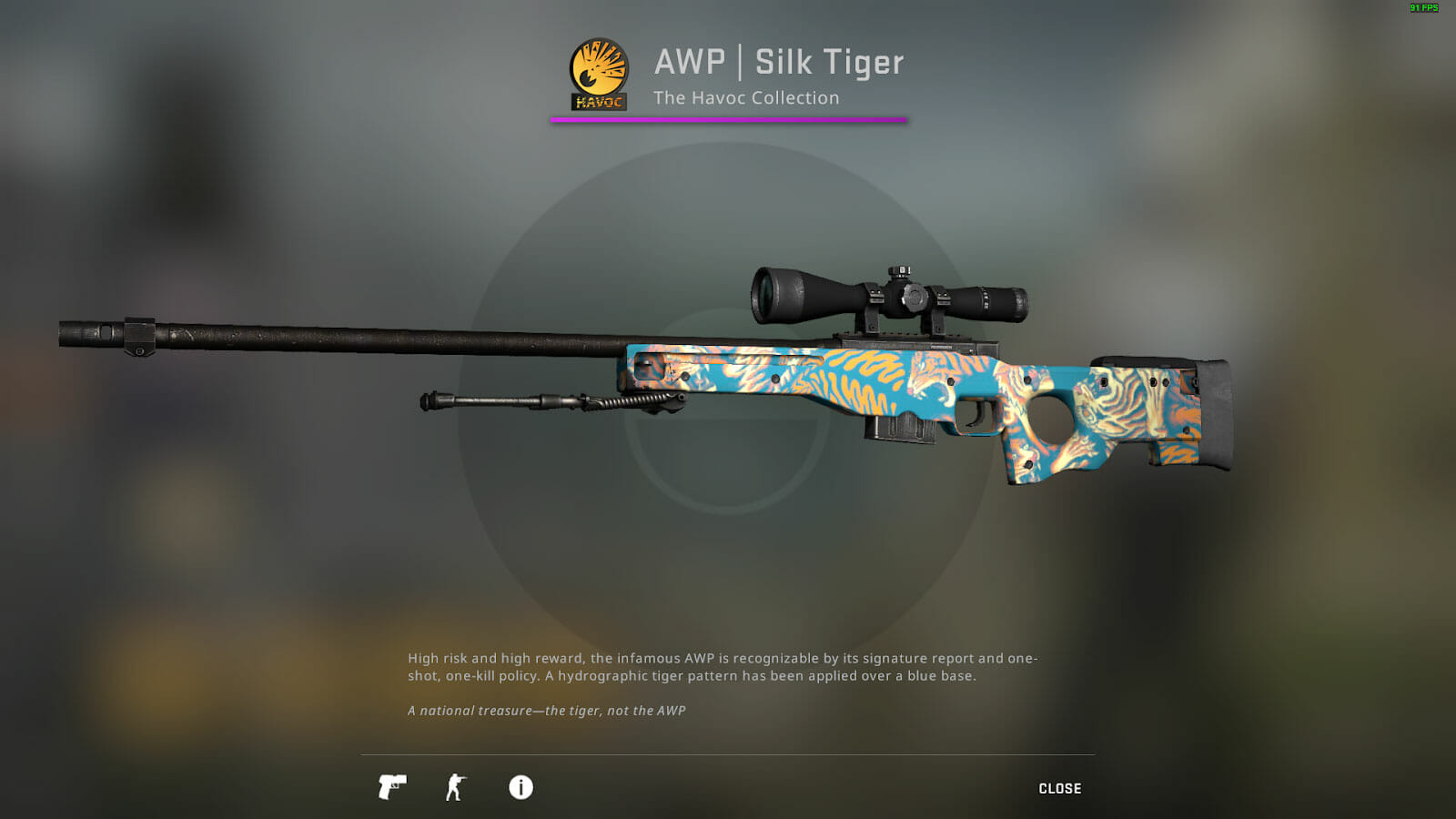 Here we have a unique skin from the Havoc Collection, which features a hydrographic tiger pattern applied over a blue base. If you like blue AWP skins, this is probably the best option for you, but it will take a substantial investment to have this skin in your inventory. 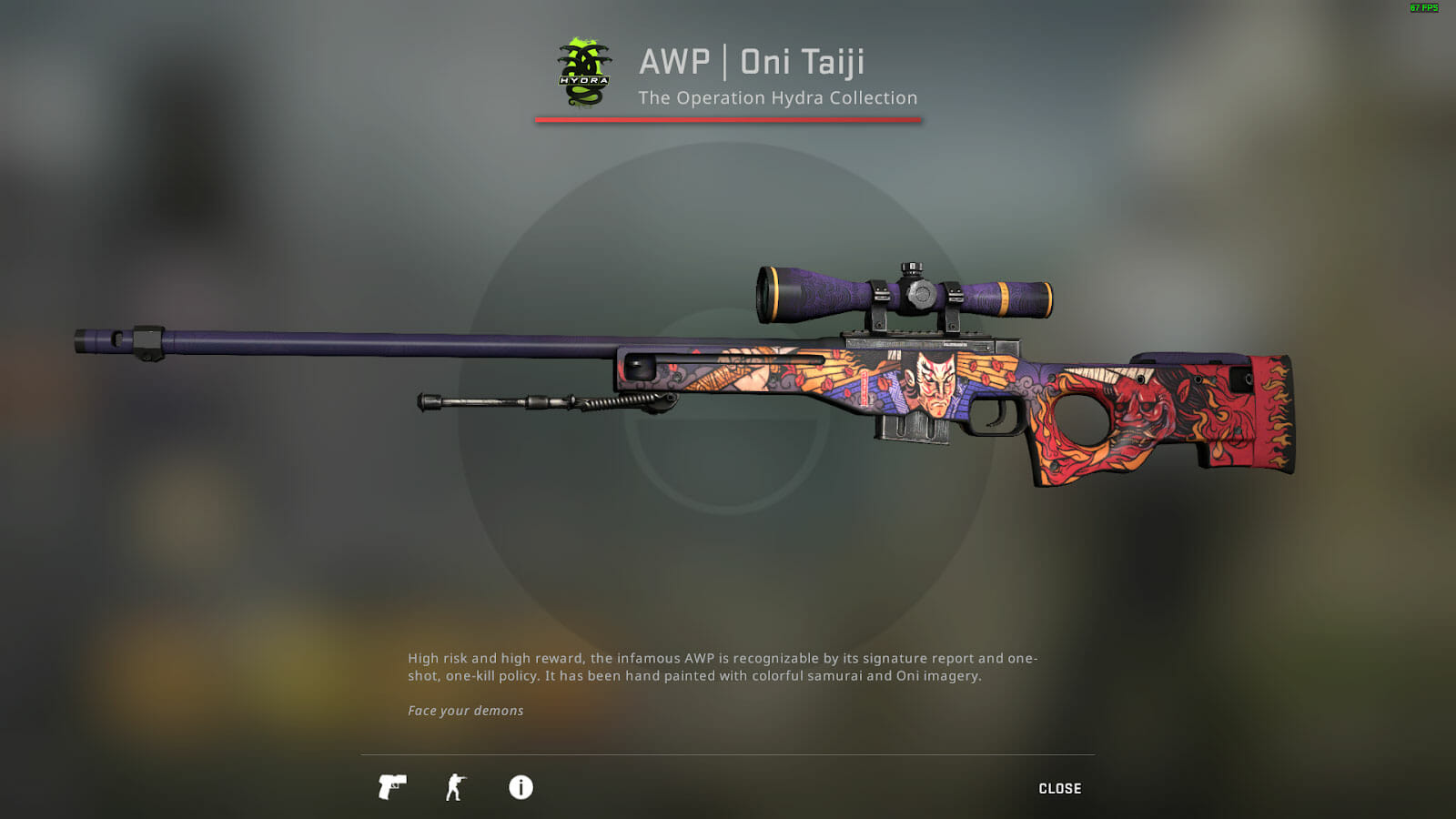 Okay, we are under the £100 mark now when it comes to the starting price, and the Oni Taiji is widely regarded as one of the nicest AWP skins you can buy, and whilst it’s expensive, it’s not a widely unrealistic purchase. It was released during the Operation Hydra Collection and has hand-painted colorful samurai and Oni imagery, helping you to “face your demons”. 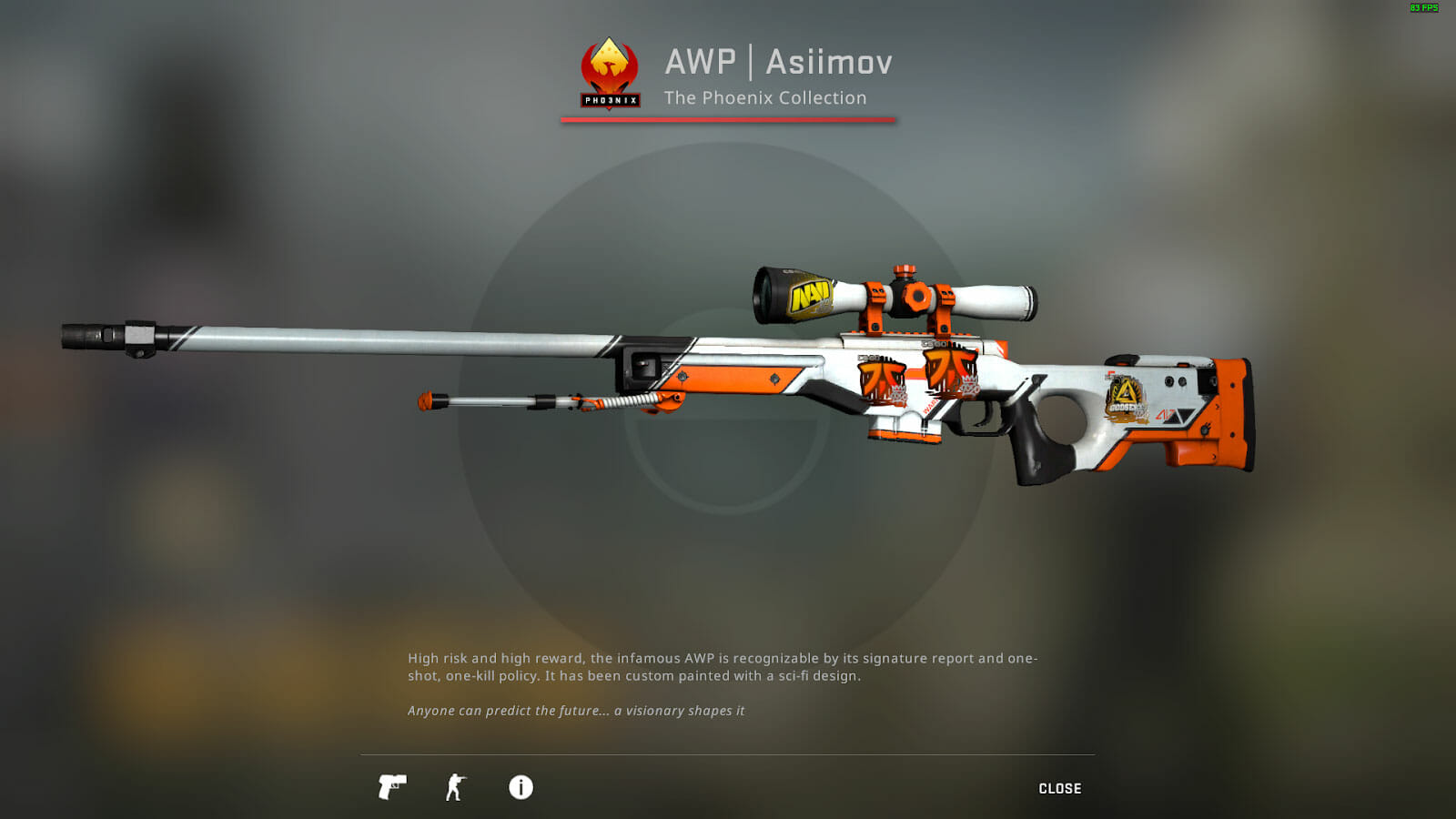 When it comes to expensive skins, the Asiimov is the most common one you will see. With the starting price just over £40, it’s a reasonable price to get yourself one of the most iconic AWP skins in the CSGO video game without breaking the bank. It came with the Phoenix Collection and features a sci-fi design. 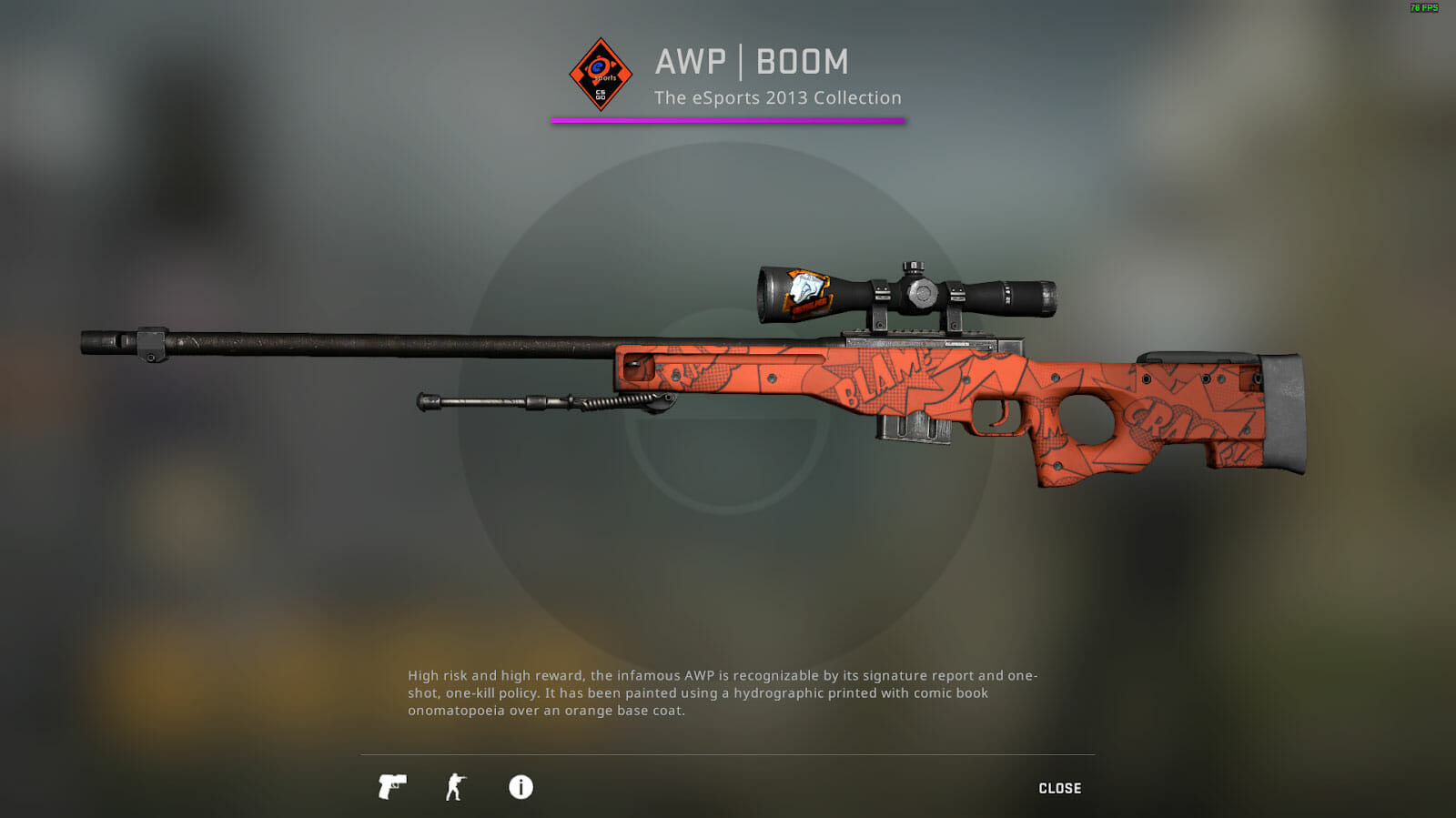 Finally, ending on a boom, we have the AWP Boom skin. Similarly priced to the Asiimov, the Boom has a unique look to it. If you’re an esports fan, the Boom was released in the 2013 eSports Collection with comic book onomatopoeia over the orange base coat.

Now that we have got the big expensive skins out of the way let’s take a look at some of the cheaper AWP CSGO skins that can be picked up without much worry and enjoyed in gameplay. These options also cater to the casual CS:GO gamer and not just the hardcore. 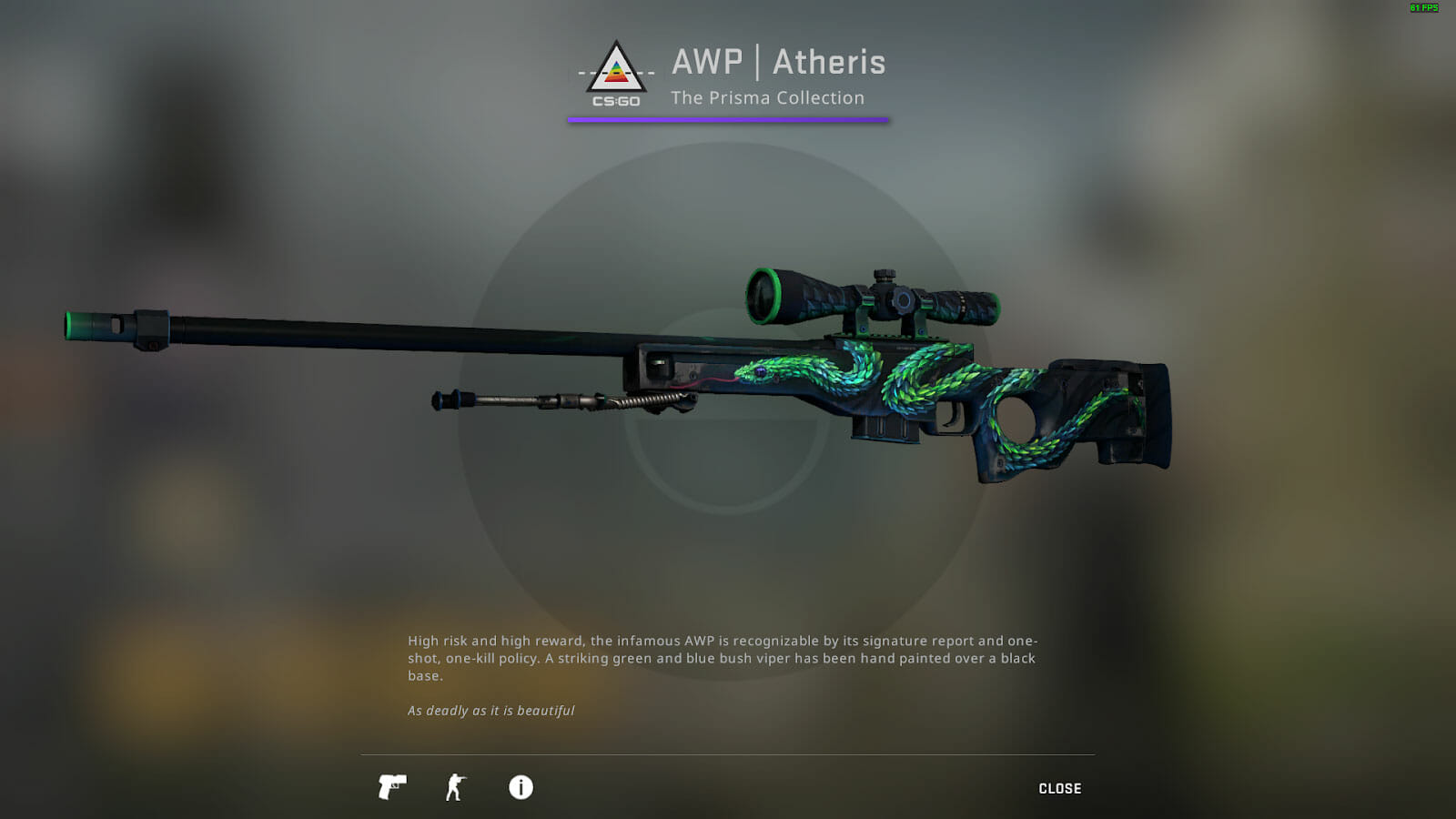 When it comes to the cheaper alternatives, it’s hard to argue against this beautiful skin being the best value for money, starting at £1.90. It’s from the Prisma collection and has a striking green and blue bush viper hand-painted over a black base. 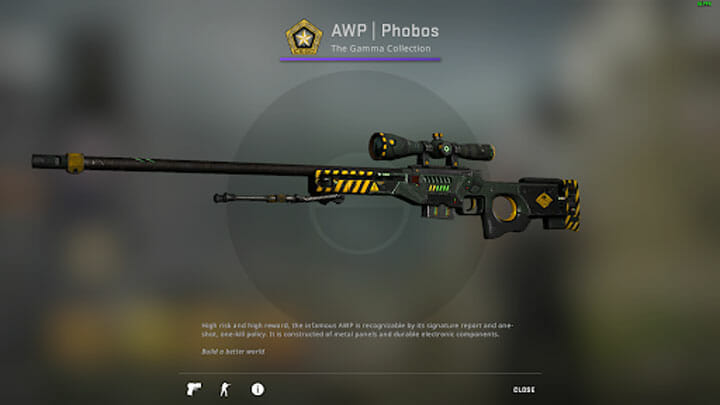 Next up is the Phobos, which starts from £1.40 and boasts a custom metal panel frame with electronic components featuring throughout. Whilst it isn’t the most flashy, for the price, it is one of the more detailed and unique skins you can pick up. It’s from the Gamma Collection. 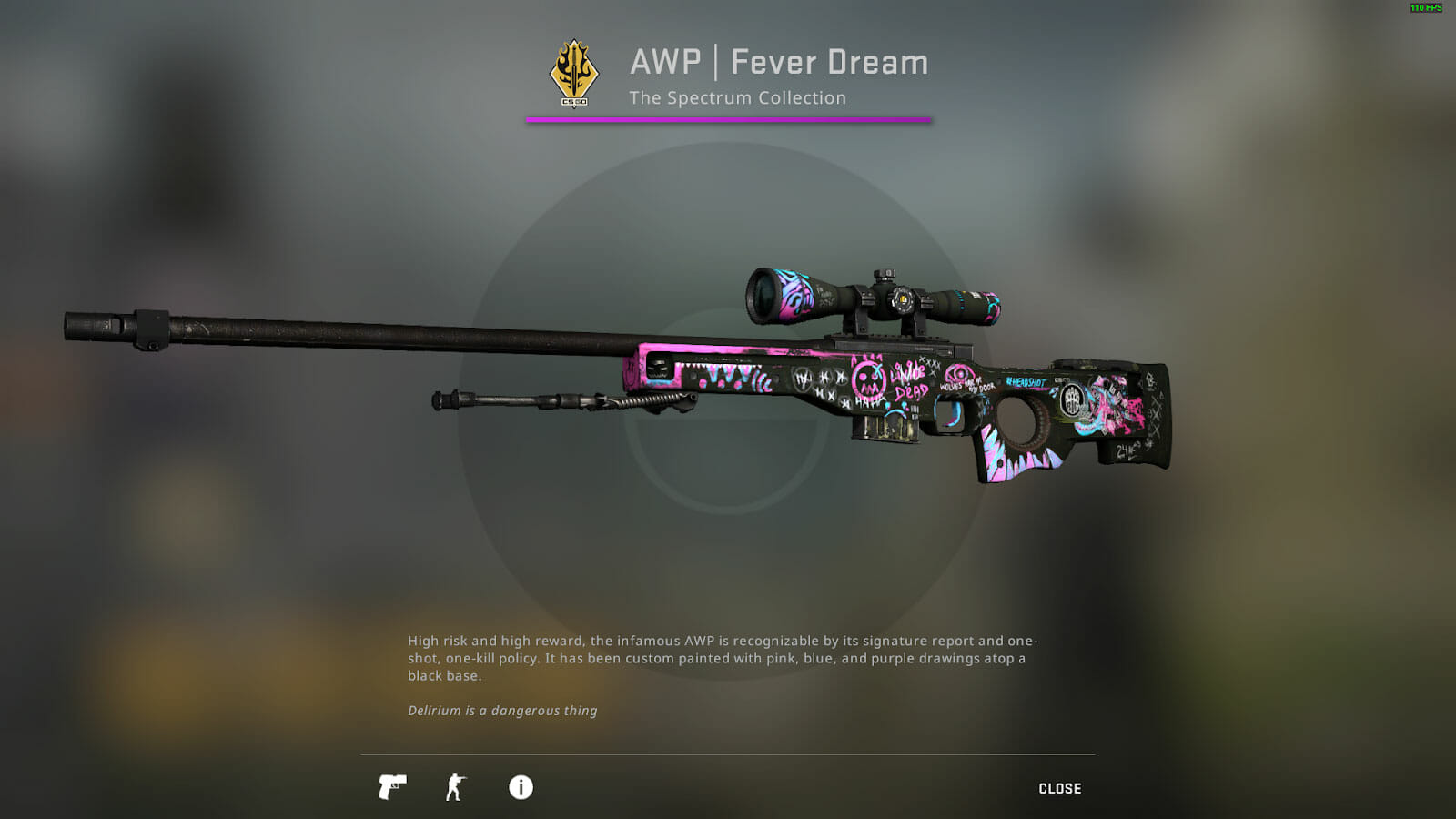 Here we have one of the most common skins you’ll see whilst playing Counter-Strike. If you are playing the most common mode featuring teams of five, you’ll regularly see the Fever Dream, and that’s because it’s cheap but wonderfully designed, starting from £3.42. It was released as part of the Spectrum Collection with custom pink, blue and purple drawings painted on top of the black base. 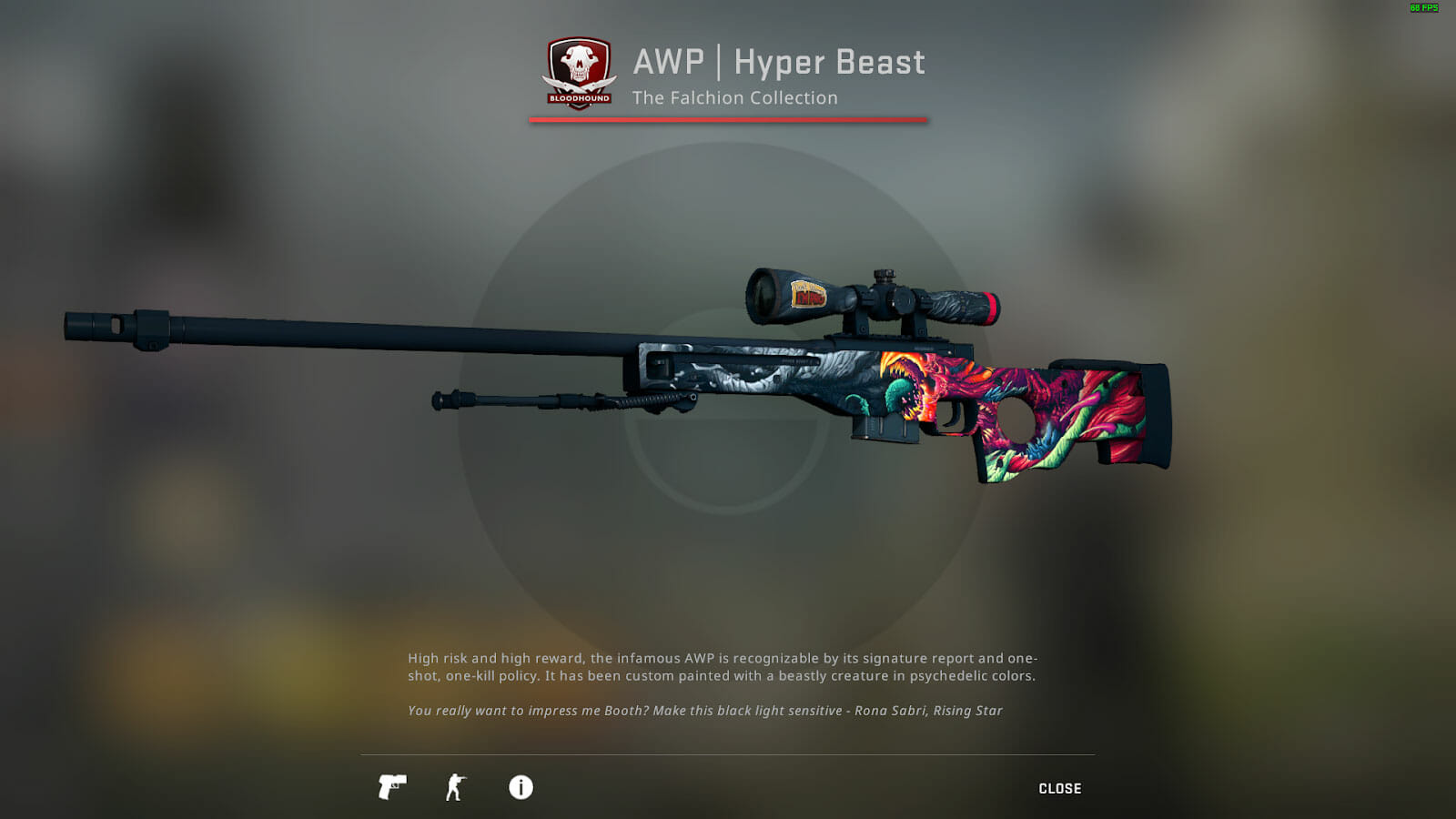 Moving into the Falchion Collection, we step the pricing up a bit, but not into a drastic amount, with the Hyper Beast starting from £15.27. It has a beautifully custom-painted design with a beastly creature in psychedelic colors. 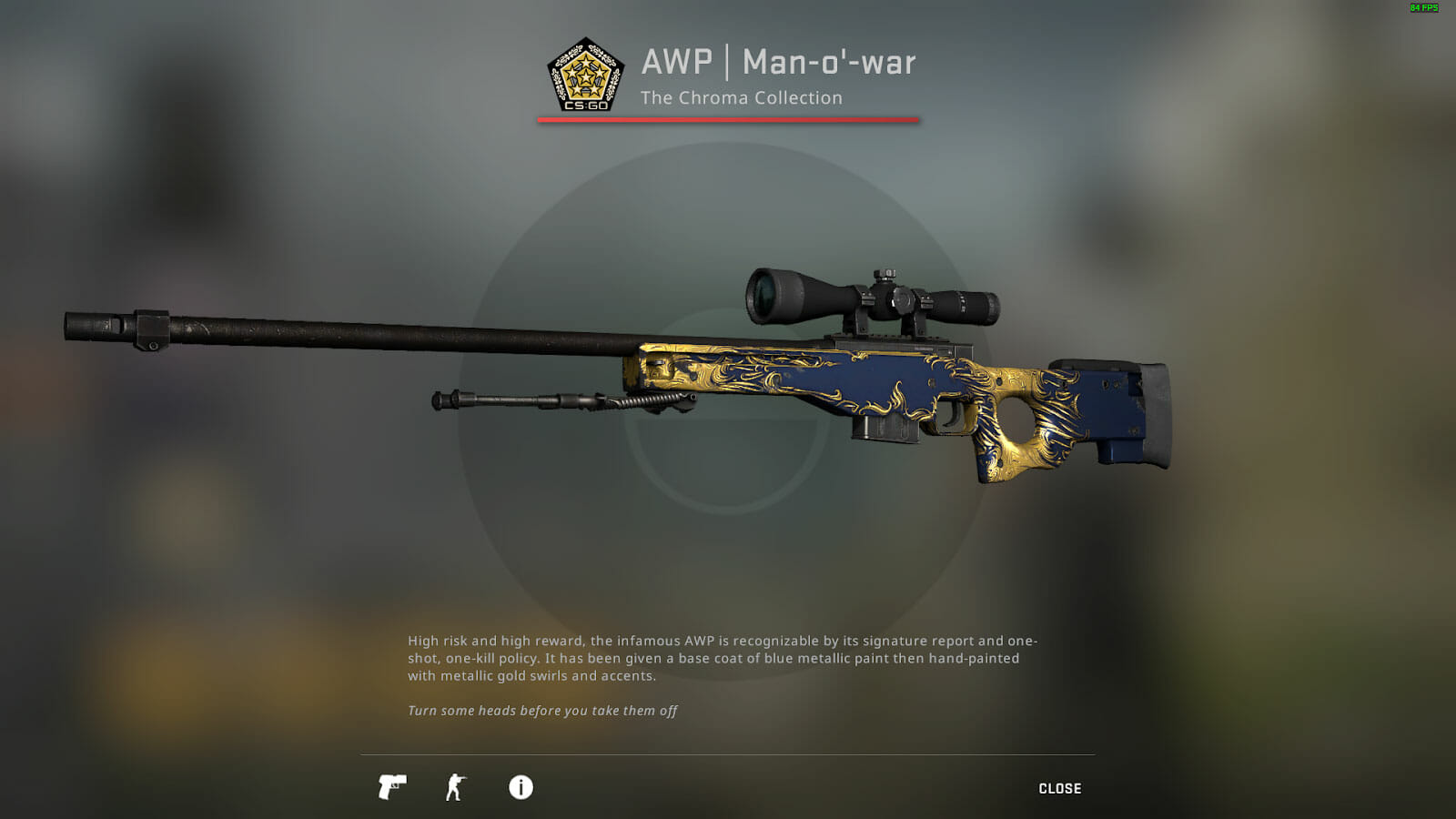 We’ll stick with the slightly higher-priced skins that fall into the cheap tier, and next up is the Man-o’-war from the Chroma Collection. The base is a blue metallic paint with hand-painted gold swirls and accents. Whilst the design is on the more basic side, and it holds an element of prestige starting from £18.10. 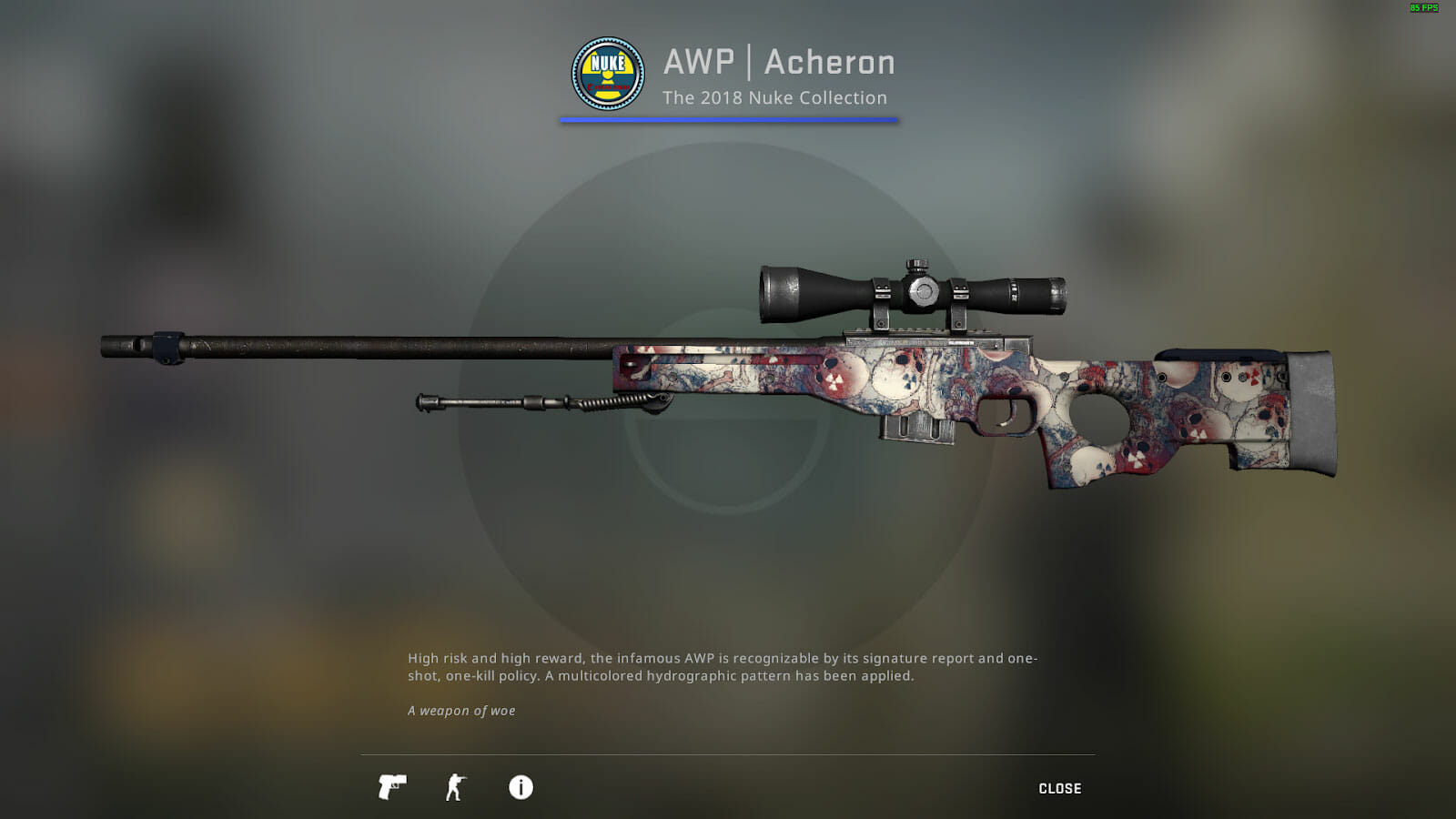 Back to cheap and cheerful, we have the Acherson skin. It’s pricing starts from £0.82 and can be a good beginner skin to get yourself started. It was released in the 2018 Nuke Collection and had a multicolored hydrographic pattern applied. 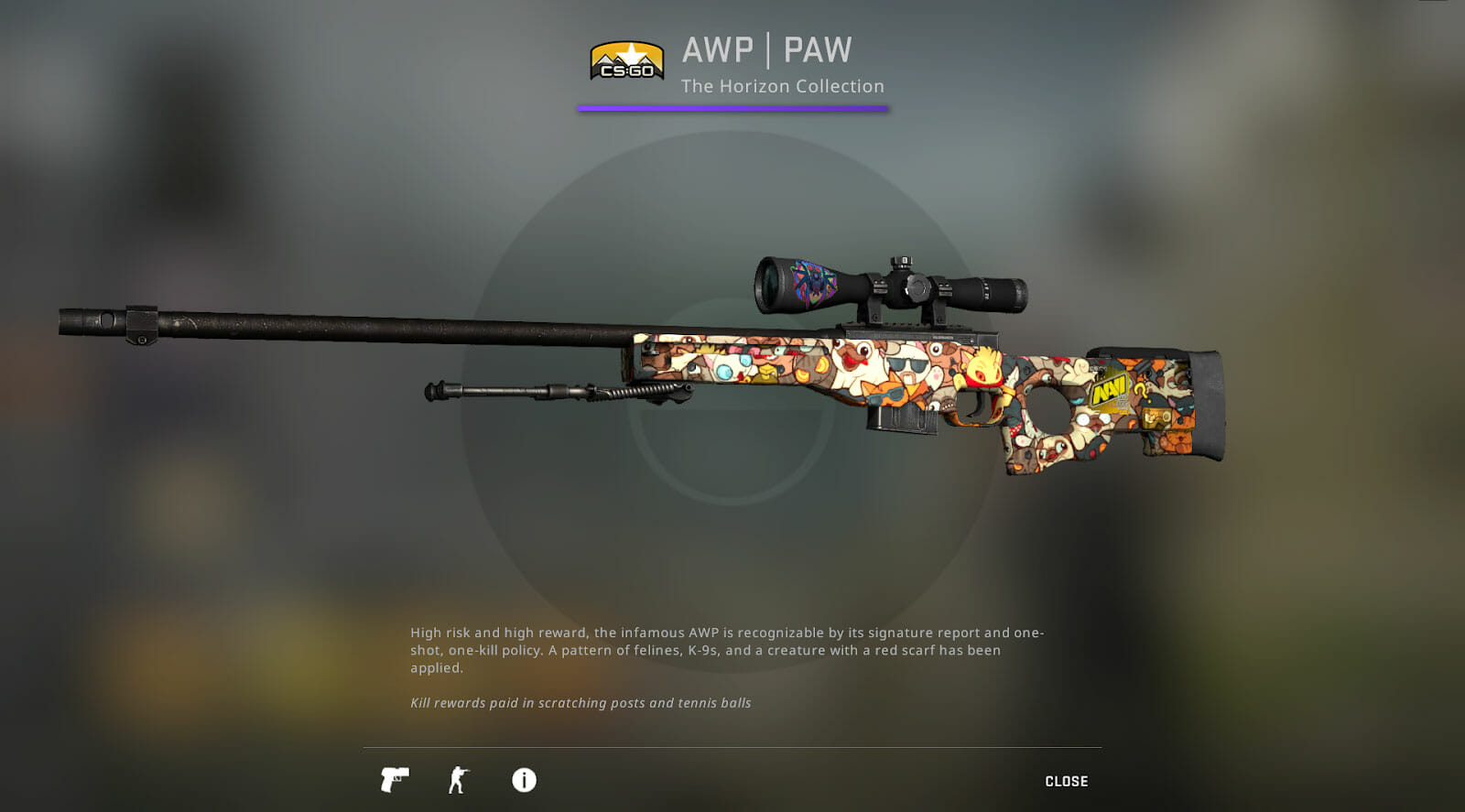 Finally, there is the PAW AWP skin which can be bought for as cheap as £1.20. It has one of the coolest designs out of the range of AWP skins that sit around this incredibly low price, making it one of the best options if you don’t want to spend much money getting yourself a nice skin. It has a pattern of felines, K-9s, and a creature with a red scarf applied and released as part of the Horizon Collection.