If you are a player who loves survival games, then you must have heard about the multiplayer-survival-only video game, Rust, developed by Facepunch Studios. And if you have played games like 7 Days to Die and Ark: Survival Evolved, then you get familiar with the gameplay Rust offers. However, Rust provides more brutally demanding gameplay which turns off most players. Hence, this Rust beginners guide helps players to enjoy the game more, especially for noobs.

New players should know that in the Rust world, everything is possible. Players will not only worry about the video game’s world, but it also has animals, zombies, and an environment that will kill their character. But also, other players in the game will come and kill off your avatar, which is the biggest threat of them all. 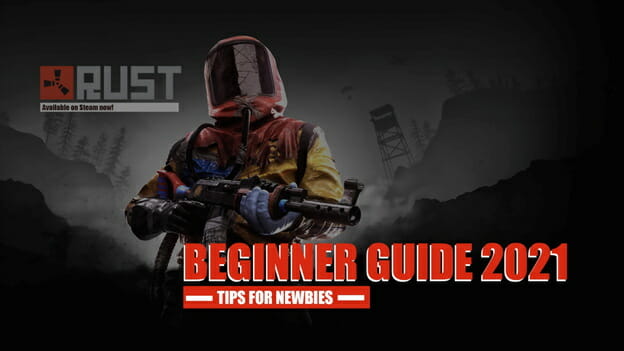 This Rust beginner guide shall teach you things that will help you survive after you are dropped naked in the game. The things a player needs to develop during the game. The basic knowledge and strategies to improve their gameplay. Here are the things any player should know before deciding to invest in this game.

Pick The Server That Works for You

Before jumping right into the world of Rust, a player will have to get rid of the first hurdle in the game, which is choosing the correct server. The server will either make their game experience a nightmare or a luxury. A player should make sure the server is available in their location. If one picks a host located on the opposite side of their area, then lag issues may occur.  Therefore, selecting a random server is a big no in this game.

A player should also be mindful of their game skill level in choosing a server. And searching for a “beginners” or “friendly” server will help which one is the right host. Another factor to be considered is knowing who you are playing with. Some servers are restricted to playing in smaller groups or even solo.

Learn Your Skills and Stats

As a Rust player, the only thing you should be thinking about is surviving this brutal game. Since Rust is survival gameplay, a player must know everything to stay alive. Luckily, what players should know is easily found in any staple game genre and analogs. And a player should only worry about the three bars that can be seen in the bottom right of the screen: calories, rads, and health.

The bar indicates how a player is close to death. If your avatar is shot, hit, bit, falls too far, damages you, then your avatar’s health will go down. A player can reduce health damage by investing in good armor and replenishing health by eating food.

It is the bar that will drain when you are running, chopping plants, and gathering resources. A player must gain calories by eating and drinking. If a player’s calories hit zero, it will affect the avatar’s health, which will drop until replenished by finding something to eat, or else the character will die.

The bar refers to radiation, specifically meaning how much the player’s character has been exposed to while playing. In Rust, being exposed to a radioactive area will increase the player’s rate of burn, which will affect its calories meter. However, if it gets over 500, then it will cause radiation poisoning.  A player will have to stay away from the radioactive places, and if exposed, then taking anti-radiation pills will help reduce health decrease. And don’t forget to eat specific foods that will reduce radiation.

When a player starts to play, the character will be dropped naked without any cloth or even essential tools to survive. The first thing a player must do is to use a rock and use it to start smashing stones and some trees to obtain wood and stone. Also, any tree in the game will provide wood. However, it won’t be the same when it comes to rocks, as a player will need to find a specific type of stone, which is mineable and is easily recognizable.

The player gathers enough materials then it is time to craft a Stone PickAxe and Stone Hatchet, which will be the first two good tools. A player can then put them into inventory, which can be open by pressing the Tab button. These tools will help any player to mine resources significantly faster which will save time and help defend oneself from danger.

A player should continue gathering stone and woods, including gathering hemp plants used for cloth, which is another crucial material in the early stage in the game. Also, a player should collect enough food by hunting animals and picking berries and could replenish the health bar. There will be some abandoned supermarkets for supply, but it might be risky to go to those locations and is preferred to be avoided. 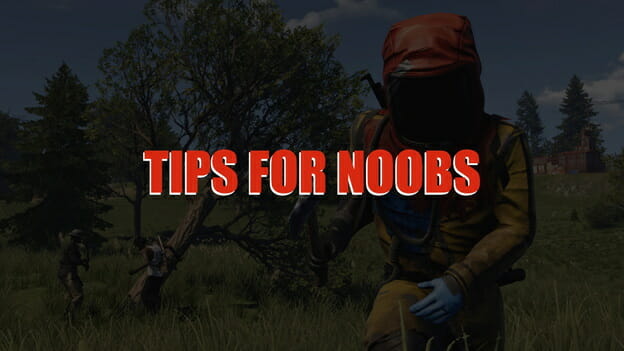 After all the essential materials a player has gathered, it is then the right time to find a base. Setting up a base as soon as possible is a must. In Rust, if you are homeless in this game, you are considered better off as dead. A base will protect the player’s character and build their skills. Here are some of the first things a player will need to create:

These are the crucial things a player needs to build your first simple base in Rust.

Keep Away from Danger

Rust is not a game for starter players. Everything designed in this game will likely attack or harm any player. It is then better for a player to stay as a hermit and stay as long as possible. During this time, a player should develop skills and survival tactics to continue in the game. Until you are confident with your ability and skills to defend or escape an ambush, it is better to stay undetected.

There will be a chance in playing Rust random players would be running in and of your base while a player will be gathering resources like forgetting to lock the base door. A player should use a triangle foundation against a square foundation placing two doors facing each other. It can create an airlock, where it can block other players from walking into your base.

Build traps around your base, and make sure to remember it. While playing a video game is a way for you to play a good Player v Player game, but you are terrible at it, then having traps will defend you from danger as you can lure enemies to your base.

Build Connections Around Your Neighbors

Unless a player is playing Rust with someone they know and trust personally, it is not advisable or a good idea to interact with anyone else while it is still early in the game. A player can locate the built-in chat to read or hear players who may sound friendly and as if they will help, but new players should not easily trust them. And it will always be a vital gamble in Rust. Other players in Rust love to trick others into exposing themselves to get easy kills and loot.

But it is not a total loss to build connections around the neighborhood as it could help prevent other players from raiding your base when you are just starting up your base. And the relationship may help you gather resources and vital tools.

Collect Gathering Resources and Improve It

When a player sets up everything and is operational, then the player will have a relatively safe place. At this point, a player can then explore areas surrounding the Rust world to collect crucial natural resources such as Stone, Metal Fragments, Wood, High-Quality Metals, Cloth, and Sulfur. A player must collect these items as possible to improve the base and keep everything from going.

A player should start looking for crates and barrels as these are the primary sources of materials. But locating these resources are considered hotspots for other players who are looking for a kill. Also, everyone will want to have their hands on them. These barrels and crates provide all kinds of scraps, components, and materials that will improve the chances of survival. Lastly, don’t forget to keep an eye for litter near the roads and find useful stuff there.

As it has said earlier, everything in Rust will try to kill a player. But other players are considered the deadliest obstacle in this gameplay. And the worst possible location to fight them is in your very own base. To help further secure one’s base, a player should try adding an airlock-style second door to protect the player from an enemy rushing while opening the first door.

Also, it is a good idea to put some spikes or other traps on the roof, if possible, it will keep other players away from your base. Lastly, during this time, a player should know the area within its base well, as this will be advantageous when doing some upgrades.

When you already have built your base and would need to explore the area to venture out on new resources, a player should start investing in good weapons, including ammo, to protect oneself from the danger of the outside vicinity. There are many selections of ammunition any Rust player could choose from, which have different multiple ammo types.

However, a player should be mindful about the types of ammo, which have different effects on the weapon of choice, which will determine the amount of damage it gives. And knowing this information may be a plus in increasing one’s chances of survival. Lastly, knowing when to use a bone-tipped arrow from a high-velocity one can give a difference between life and death.

Players should know where to locate monuments as it is a popular place to look for some Player v Player fight or loot. Also, it is a good spot resource for gearing up quicker during the game.

Another good place to explore is the sea to avoid bloodthirsty players. It is a better spot to collect some resources when going around the land gets a bit dangerous. Look for a floating junk pile, as it is another great way to find valuable resources without having to fight over them with anyone. Of course, it is not one hundred percent guaranteed a player wouldn’t have some action out in the sea. However, it is likely uncommon.

Never Stay in One Place

Since Rust is a brutal and hard game for noobs, a player must never stand still and continue to roam around. No matter how far a player is in the game, one should continue to walk around the game and change patterns in doing so. A player must change his movement style to avoid the instant location of other players who want a kill. Making sure a player is not staying in one place longer than five minutes will lessen exposure to immediate danger.

With every information given in this Rust Beginners Guide, you are now familiar with the basic things you will need to do. And from here on, you are on your own. Good luck! Always be safe, and stay alive out there! Don’t forget, enjoy playing Rust and learn strategies that might also be helpful for you to survive in the real world.